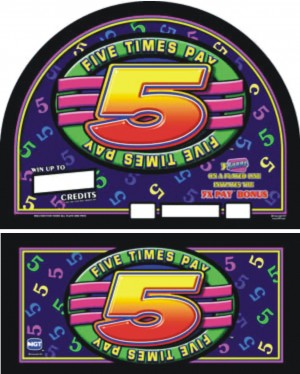 IGT made another version of this Five Time Pay slot game with more multiple lines to be played. This game is played on the new 044 enhanced deluxe memory computer board. It has 25 lines with 5 reels so that the slot player could almost win something on every play. This video slot game has numerous pay symbols like watermelons, cherries, grapes, oranges, 7’s, 7 bar and also card symbol 9 through ace. This video slot game has the Five Times Pay Multiple Scatter Bonus feature in which the scatter pays are paid in addition to the other pay line wins. When one scatter pay symbols is shown with a 5X pay symbol in a winning combination, the scatter pay is multiplied by 5. Thereby, when 2 scatter pay symbols are revealed along with a 5X pay symbol in a winning combination the winnings are multiplied by 25. In this game the lucky slot payer can win fast in this good old favorite slot game.