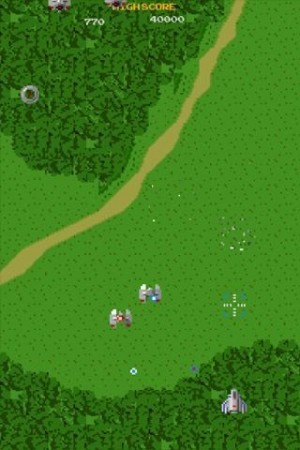 Xevious takes place on Earth. An invading alien race has set up shop, and it’s up to the player to send ’em home. The game has a large number of different ground and air-based targets of either belligerent or non-belliegerent nature. In addition to the jumper-based difficulty levels, the game also adapts its difficulty to the player. If the player is successful against a type of attacker, an even deadlier type of attacker shows up to challenge the player.

The player uses a joystick to pilot a combat aircraft called a Solvalou, which is armed with a forward-firing Zapper for aerial targets and a Blaster which fires an unlimited supply of air-to-surface bombs for ground targets. The game, presumably set in Peru, was noted for the varied terrain below, which included forests, airstrips, bases, and mysterious Nazca Line-like drawings on the ground.

There are various aerial enemy aircraft which shoot relatively slow bullets, as well as (presumably unpiloted) fast-moving projectiles and exploding black spheres. Ground enemies are a combination of stationary bases and moving vehicles, most of which also fire slow bullets. Giant floating Andor Genesis motherships appear in certain areas; these are killed by knocking out their cores. These are considered one of the first level-bosses to be incorporated into a video game.

The game scrolls through 16 areas, looping back to Area 7 after Area 16. The Solvalou continually advances over varying terrain, and the boundaries between areas are marked only by dense forests being overflown. If the player dies, play normally resumes from the start of the area. If the player has completed at least 70% of the area before dying, play will begin at the start of the next area instead. As the Solvalou constantly flies forward, it is possible to advance without killing any enemies.

There are structures called “Sol Citadels” hidden throughout the game. The targeting sight will briefly flash red whenever it is over one of these structures. Dropping a bomb at that spot will first uncover the silo-like object (worth 1000 points) and dropping another bomb on it will award another 1000 points.

There are also four special flags hidden at certain points in the game. Uncovering and flying over a special flag will award an extra life. The targeting sight will not flash when it is over a hidden flag.