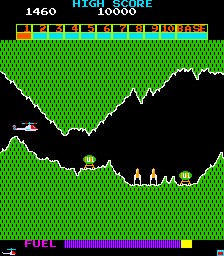 The player controls a helicopter and has to guide it across a scrolling terrain, battling obstacles along the way. The player uses a joystick to accelerate, decelerate, move up, and move down. The ship uses a laser and bomb to destroy defenders, tanks, and UFO’s while infiletrating 10 Super Cobra defense systems.

The ship has a limited fuel supply, which is depleted over time. More fuel can be acquired by destroying fuel tanks in the game.

The game is divided into ten sections, plus a finale, each with a different style of terrain and different obstacles. Players navigate through ten levels and a base, where they must safely make it through the level and safely remove the booty. The levels are described as follows,

There is no intermission between each section; the game simply scrolls into the new terrain. If the player destroys the booty on the final level, they must start back at the beginning of the level.