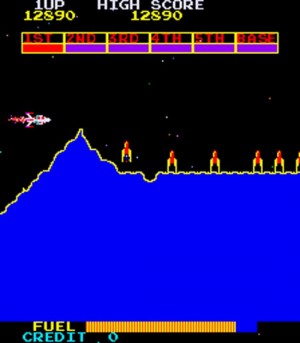 The player controls an aircraft, referred to in the game as a “Jet,” and has to guide it across a scrolling terrain, battling obstacles along the way. The ship is armed with a forward-firing weapon and bombs; each weapon has its own button. The player must avoid colliding with the terrain and other enemies, while simultaneously maintaining its limited fuel supply which diminishes over time. More fuel can be acquired by destroying fuel tanks in the game.

The game is divided into six sections, each with a different style of terrain and different obstacles. There is no intermission between each section; the game simply scrolls into the new terrain. Points are awarded based upon the number of seconds of being alive, and on destroying enemies and fuel tanks. In the final section, the player must destroy a “base”. Once this has been accomplished, a flag denoting a completed mission is posted at the bottom right of the screen. The game then continues by returning to the first section once more, with a slight increase in difficulty.