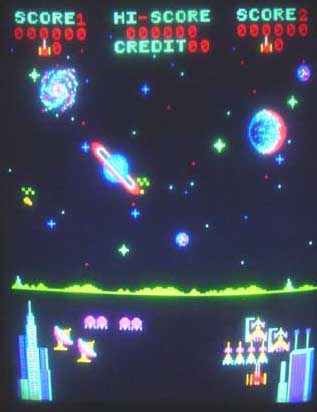 Pleiads is a multi-stage space shoot ’em up in which enemy ships fly at the player in waves in a similar fashion to games like Galaxian and Phoenix. Ships emerge from a mothership at the top of the screen and swoop downwards in a series of patterns which players must anticipate as they shoot the ships and avoid being obliterated by the Martian onslaught. There are four stages in the game. In the first stage the Earth space ship must defend the space station from Martian invaders who have the ability to transform from flying invaders, to walking invaders who build walls across the Earth city; these barriers must be destroyed. At the end of stage one the Earth space ship flies to the top of the screen to prepare to meet stage two. In the second stage the player encounters eight space monsters who must be hit directly on center to be destroyed before moving onto stage three. In this stage invaders emerge form a space ship at the top of the screen and swoop down on the player in sweeping attacks. In the final wave the player has to navigate through parked spaceships to dock on a landing pad as the screen scrolls downwards. Extra points can be gained in this stage by collecting flags as the player moves towards the landing corridor.