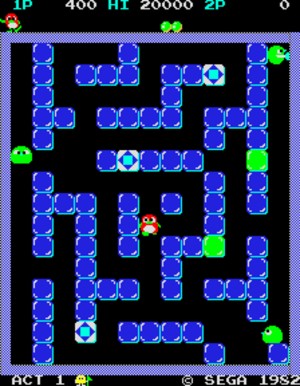 You are a penguin in a maze of ice-blocks. Slide the blocks to squash the Sno-Bees chasing you or electrocute them by trapping them along a wall. Score 10,000 points for aligning three special diamond blocks. Bonus points are awarded for finishing a level quickly.

Pressing the Push button slides ice blocks across the playfield, stopping only when they hit another ice block or the wall. Attempting to push an ice block in front of another will it crushes it. Sno-Bees hatch from flashing ice blocks, but they can be killed before they hatch by crushing the block.

Aligning the three diamond blocks along a wall scores 5,000 points while aligning them within the playfield scores 10,000. The game has animated intermissions featuring penguins doing things like dancing, imitating Space Invaders, and playing a cocktail arcade game. The game’s music very catchy and you will never get it out of your head.