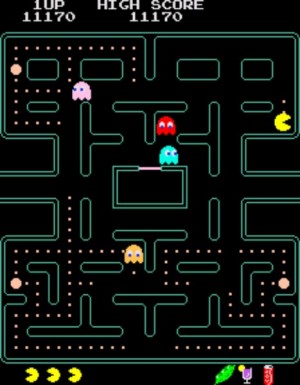 The programming is is a lot like Pac-Man except that the maze is outlined in green instead of blue. The prizes that appear in the middle of the maze are cans of Coke, cocktails, green beans, cakes, gift-wrapped boxes, etc. Whenever Pac-Man eats an energizer, the ghosts not only turn blue but they also get apple stems on their heads. On later levels, sometimes only three of the ghosts turn blue.

The game plays exactly like the original except that there are various events (apparently selected at random) that may or may not occur after Pac-Man eats one of the four power pellets. These events include but are not limited to: the maze’s structure becoming temporarily invisible, the ghosts turning invisible while they are blue, or only three of the four ghosts turning blue. The prizes in the middle of the maze can also act as a power pellet. Another difference is that later in the game the maze’s structure becomes permanently invisible. The scoring system is exactly the same as in the original Pac-Man game