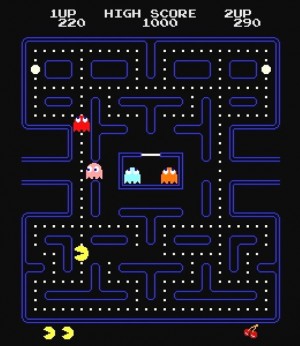 Pac-Man must clear the maze of all 240 dots and all four energizers to proceed to the next level of difficulty. As Pac-Man eats the dots, the ghosts chase him around the maze and if Pac-Man collides with one of the ghosts, he is a goner. He can eat one of the energizers to turn the ghosts dark blue, which make them edible for him. But after Pac-Man has eaten any of the ghosts, their eyes will return to the pen in the middle of the maze where they will each regenerate into their former selves and return to chase him again.