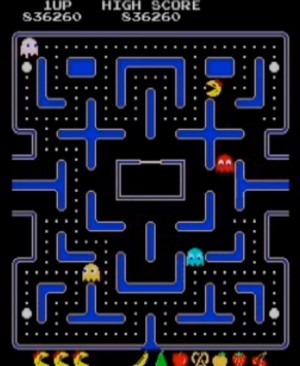 Ms. Pac-Man (Fast Mode)
The game play of Ms. Pac-Man is largely identical to that of the original Pac-Man. The player gathers points by eating dots and avoiding ghosts (contact with one loses a life). Energizers, or power-pellets, change the ghosts, which reverse their course and they can be eaten for extra points. Fruit bonuses can be consumed for increasing point values, twice per level. As the levels increase, the speed increases, and energizers generally lessen the extent of the ghosts’ vulnerability.
There are also some differences between Ms. Pac-Man and Pac-Man:
• The game has four different mazes that appear in different sets of colors.
• Three of the four mazes have two sets of warp tunnels, as opposed to only one in the original Pac-Man.
• Unlike the original Pac-Man, the spaces in between the walls are filled in, making it easier to see where the path is.
• The ghosts’ behavior patterns are different and includes semi-random movement, preventing the use of patterns to beat each level.
• Instead of appearing in the center of the maze, fruits bounce around the maze, entering and leaving through the warp tunnels. Once all fruits have been encountered, they appear in random sequence for the rest of the game, starting on the eighth level.
• The orange ghost is named Sue, rather than Clyde.
• The three intermissions have changed to follow the developing relationship between Pac-Man and Ms. Pac-Man (from when they first meet to having a stork drop off their baby).
• The sound effects and music of the game are quite different from the Pac-Man sounds.