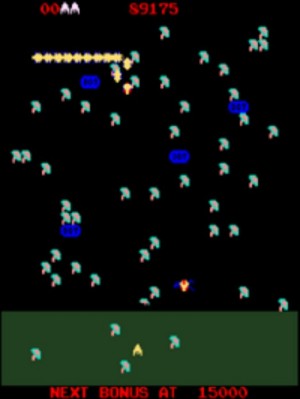 The gameplay of Millipede is similar to Centipede but differs mostly in enemies:
• Earwig: same as the scorpion in Centipede, making mushrooms poisonous so that the millipede will charge straight to the bottom of the screen after touching them.
• Bee: same as the flea in Centipede, dropping mushrooms in a vertical line and requiring two shots to kill.
• Spider: same behavior as in Centipede, bouncing irregularly across the lower portion of the screen and eating mushrooms. Multiple spiders can appear at the same time on higher levels.
• Inchworm: when hit, slows all enemies for a short period of time.
• Beetle: crawls around the player area for a while, then climbs up and leaves the screen, turning any mushrooms it touches into indestructible flowers. When hit, everything on the screen scrolls down one row.
• Dragonfly: drops mushrooms while zigzagging down, and can be destroyed with a single shot.
• Mosquito: bounces off the sides of the screen as it descends diagonally. When hit, everything on the screen scrolls up one row.
• DDT bomb (stationary): can be blown up with one shot, destroying all enemies and mushrooms within the blast radius. Whenever the mushrooms scroll down, a new bomb is added at the top of the screen. Up to four bombs can be in play at one time.
All flowers and poisoned/partially destroyed mushrooms revert to normal, whole mushrooms when the player loses a life.
At regular intervals during the game, the player will face a swarm of enemies (bees, dragonflies, etc.) instead of the usual millipede. Each enemy destroyed awards increasing points, up to a maximum of 1,000 points per enemy; this attack ends when either the entire swarm has passed or the player loses a life. Also, at intervals new mushrooms will grow on the field while others die off.
Players can also choose at the start of the game whether to play at an advanced level, starting with a score that is a multiple of the number of points needed to earn an extra life (by default, 15,000). The gameplay is generally much more advanced than it would be had the player started with a score of 0 and worked their way up to that point level. The maximum advanced level allowed is a function of the preceding player’s score, and games started at an advanced level where the player did not earn at least one extra life are not eligible for the high scoreboard.