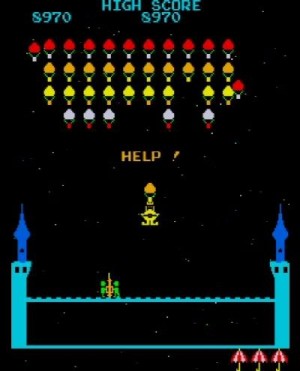 The player controls two green men (likely soldiers in the king’s army) with an orange cannon that fires at squads of descending balloons. You must protect the king and prevent him from being captured and carried away by one of the balloons. Unlike most shooter games, the player’s cannon can be hit and destroyed any number of times; it is the king that must be protected. The game ends when the king is carried away three or four times, depending on if the player won a 1-up. The game only goes up to round 48