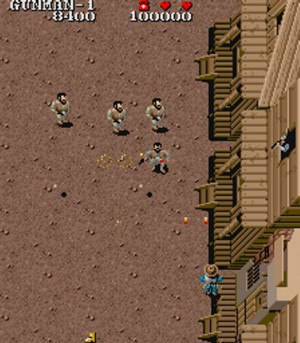 The game, which has a Western theme, centers around a character named Billy Bob, a bounty hunter who is after vicious criminals of the Wild West. Despite its name and theme, it has no connection to the western TV series Gunsmoke.

This game is a scrolling shooter in which the screen scrolls upward automatically and players only have three ways to shoot, using three buttons for left, right, and center shooting. The player can also change the way the gunman shoots through button combinations. The player dies by getting shot or struck by enemies otherwise by getting caught between an obstacle and the bottom of the screen. They player can collect special items, including a horse for protection up to three hits (or get killed by an obstacle), boots for speed of movement, bullets for faster shots and rifles for longer shot range. These items are found by shooting barrels and rifles, boots, and bullets can stock up to five. Some items that add score points include stars, bottles, bags, dragonflies, and cows, but two other items to watch out for are the yashichi, which is a 1up and the cattle skull, which reduces Billy’s power.