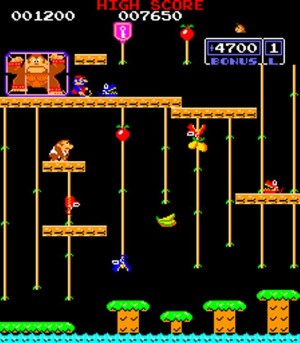 Mario, known beforehand as Jumpman, has incarcerated Donkey Kong after re-capturing him in Donkey Kong. Donkey Kong Jr. must save his father from Mario by putting the key or keys in the stage into all of the locks. Mario attempts to stop Donkey Kong Jr. by releasing the many animals he controls to knock DK Jr. off the vines and platforms. DK Jr. defeats Mario if the player completes the fourth stage by putting all six keys in their locks, making the floor disappear. Donkey Kong Jr. catches Donkey Kong while Mario falls onto the ground.

Like in Donkey Kong, if the player completes the final stage, Donkey Kong Jr. restarts at the first stage with a higher level of difficulty. Mario makes an attempt to chase after Donkey Kong, but Donkey Kong kicks Mario into the air. Mario then retreats.

The player controls Donkey Kong Jr. and has to rescue Donkey Kong from Mario, who had captured him. Like its predecessor, Donkey Kong, Jr. is an arcade-style platform game. There are a total of four stages, each with a somewhat different theme. Donkey Kong Jr. can run left and right, jump, and grab vines/chains/ropes to climb higher on the screen. He can slide down faster by holding only one vine, or climb faster by holding two. Enemies include “Snapjaws,” which resemble bear traps with eyes, bird-like creatures called “Nitpickers” that Mario releases to thwart Donkey Kong Jr., and “Sparks” that roam across the wiring in one of Mario’s hideouts. These enemies will cost Donkey Kong Jr. one life if he touches them, but they can be defeated by dropping fruit onto them. At the top of every stage is Mario and Donkey Kong, and when Donkey Kong Jr. reaches the top, he chases Mario to the next stage. If the player beats the fourth stage, a cut scene is shown of the floor disappearing and the three fall to the ground. Donkey Kong Jr. catches Donkey Kong and Mario falls and hits the ground. Once the four stages are completed, the player advances to the next level with increased difficulty and his or her points and lives retained. Up to two players can play the game alternately.