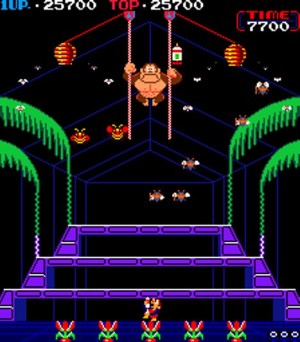 Stanley is a bugman. Donkey Kong has taken refuge in his greenhouse and it is now up to Stanley to stop the ape from stirring up any more insects that will soon destroy his flowers. Stanley saves the flowers by spraying bug spray on Donkey Kong.

The game is a simplistic shooter which actually incorporates many ideas from an older game entitled Space Firebird and adapts them into a new setting, which consists of only three repeating rounds, requiring the player to defend flowers as the objective rather than have any specific long-term goal in mind. Throughout the levels are scattered various enemies: Buzzbees, beespies, queen bees (which shatter into deadly pieces when destroyed), creepy caterpillars, butterflies, beetles, moths, beebombs and vine eaters.

Stanley, who wears suspenders similar to the previous protagonist, Jumpman, must destroy the insects as they attempt to steal his flowers. Donkey Kong himself hangs from two vines at the top of the screen. Continuously using bug-spray on him will force him upwards and eventually to the top of the screen to complete the level. Killing all the bugs will also cause Donkey Kong to exit the screen and the game will go to next level. Typically, the vine grasped by Donkey Kong’s left hand holds the super spray can, which will drop to the ground if the ape climbs high enough that his hand knocks it loose; this spray can forces Donkey Kong upwards at a much faster rate than the standard version, but it only lasts for a certain number of shots and only appears at the start of each “life”.