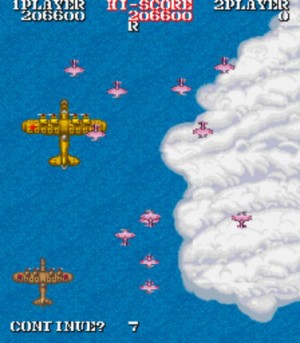 This updated version was released exactly one year after the original game’s debut. 1943 Kai is an enhanced, “wild” version of 1943 that was made only available in Japan under the name 1943 Kai: Midway Kaisen (or 1943?: ????????). Most of the graphics and sounds have been reworked, the weapons have been made more extreme and some fairly strange things (laser-firing WWII planes and ships that run on ground) have been added. The trademark P-38 has been replaced with a biplane Boeing Stearman E75 N68828. This version contains many additional levels and original music.

Pressing both buttons simultaneously causes the player’s ship to loop out of the 2-D action plane temporarily. This is very useful for getting behind enemy planes. Pressing Special calls up a special attack lightning in the air, a wave over water, but also uses up the player’s energy. The game is over when the player runs out of energy, but energy can be replenished via power-ups or for completing a level. Likewise, in two-player mode, players can share life energy by placing both planes over each other for two seconds.