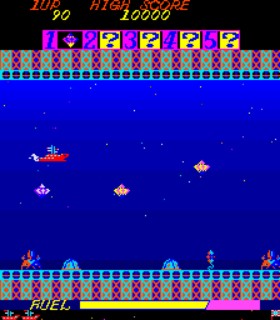 The player has to guide a submarine armed with torpedoes and missiles through five levels while fighting different underwater terrors. The game play is easy during the first five areas but it gets really tough at the later levels where the underwater landscape “grows” and there is not much space left for maneuvering the submarine. At the end of each area the boss-submarine appears and its firepower is not easy to overcome.
US Billiards, the 800 Fathoms maker, released 10 different machines in our database under this trade name, starting in 1973.

Other machines made by US Billiards during the time period 800 Fathoms was produced include Ab$cam, Variety, US Billiards, Shark, Video Pool, and Survival.

In the first area where the player moves the submarine through the underwater fortress, the moving barriers can be shot with the missiles just as they appear on the screen and have a white color.