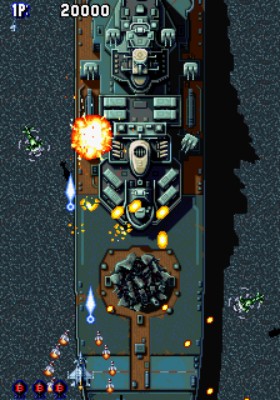 Aero Fighters is a vertical-scrolling shoot ’em up arcade game. There are eight stages in this game. The beginning stages consists of randomly chosen areas from nations of unselected fighters (assuming those fighters have nations). If Rabio or Lepus is chosen, all four rival nation stages become playable. After completing all rival nation stages, there are four more stages. Player and team-specific endings occur after completing the first loop. After completing the 2nd loop, the ending consists of all pilot pairs giving a speech, with the second pilot in the last pair giving a cheat code.
The SNES version adds hidden boss attack and time attack modes, and two hidden playable fighters, Rabio and Lepus (from Rabio Lepus, known outside of Japan as Rabbit Punch). In the SNES version, there are two stage loops, and the order of rival nations is fixed. In the second loop, the game’s difficulty increased, except in the very hard difficulty, where the second loop is easier.
A player can only chose a fighter from the respective side. In a 2-player game, the player that begins the game determines the available nation of both fighters, until the game ends.