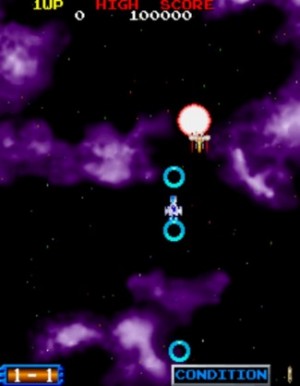 In Blast Off, the player controls a ship, facing the top of the screen, that can move freely while the background scrolls down, bringing enemies in to view. The player may destroy enemies for points.
There are two buttons used. One is used to fire circular lasers, while the second button is used to change the ship’s firing pattern. The patterns are:
Red: two lasers in a spiral pattern
Blue: one laser straight ahead, one behind
Yellow: one laser straight ahead, one left, and one right
Green: two lasers diagonally forward (one to the left and one to the right), and one straight behind.
By holding down the button, the ship will fire more powerful, spherical lasers.
Even though the game is the sequel to Bosconian (which used a synthesized voice saying “Blast off!” at the beginning of every round), Blast Off had more in common game play-wise with Namco’s own Dragon Spirit than with Bosconian. This is especially noticeable in the 3rd area of every world, where the player’s ship becomes enormous. Despite the game play differences, the connection with Bosconian was emphasized in the marketing of the game, with the hexagonal space stations from Bosconian appearing in the title of the game cabinet and in Namco’s press literature, and also making appearances in the game itself. The game is also worth noting for its use of English phrases, such as “To push start only 1 player button”, “Go next”, “Congratulations” and “Entry your name”.