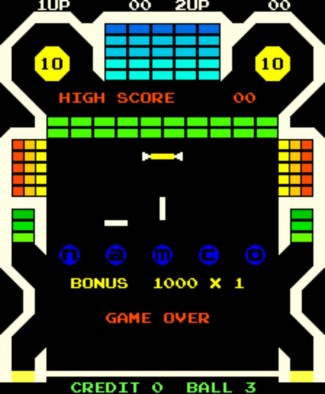 You control a paddle that must rebound a ball into the colorized bricks and pop-bumpers.

Hitting the bottom paddle will restore any sets of bricks that have been completely cleared out.

Occasionally the ball will get stuck in a very long loop (this usually happens with the pop bumpers). Just sit back and relax while the points rack up, but eventually the game will figure out the ball is stuck and shoot it out in some other direction.

Get the ball to light up “N A M C O” on the screen to increase the bonus multiplier.