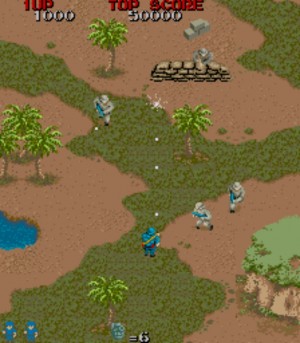 Commando is a vertically scrolling shoot’em up in which the player takes on the role of a highly trained commando soldier called “Super Joe”, who starts the game by being dropped off in a jungle by a helicopter.

Joe’s mission is to rescue captives and destroy the enemy bases and strongholds that appear at the end of each level, killing as many enemy soldiers as possible in the process.

The end-of-level strongholds see waves of enemy soldiers ordered to attack by a cowardly officer, who immediately runs away. Shooting the fleeing officer earns the player bonus points. Along the way, players can attempt to free prisoners-of-war by shooting their enemy guard escorts as they are transported across the screen.

Super Joe carries only two weapons: a limited-range machine gun with unlimited shots, and a limited supply of hand grenades. Extra grenades can be picked up as the player progresses through the levels.

The arch bridge is a dangerous spot so watch for grenade attacks from above. Be careful of trucks and jeeps that may try to run over you. Do not fall into rivers or ponds. Trees, walls and other obstacles may be used for cover.

This tip will let you rack up big points and all the extra men you can : on the first stage, there is a cliff on the right-hand side of the screen. The enemy troops will jump off the end of this cliff and attack you. If you walk until the enemy troops START jumping off, and then stop, you can just stand there and keep killing them until you either get sick of playing or reach the maximum amount of extra men the game allows. If you plan on playing through the rest of the game you should stop as soon as you reach the maximum amount of extra men, as the longer you just sit there, the harder and faster the enemies become, making the rest of the game substantially more difficult.