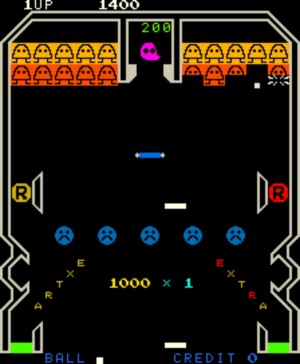 You control a paddle trying to rebound a ball into the ghost like creatures.

Although the blocks have ghost images on them, each “ghost-image” is two blocks stacked on top of each other. Clearing out all the blocks on one side will cause a little creature to start running (very slowly although his legs move fast) from one side of the block area to the other. Hitting this creature will give you some point value times the multiplier showing when he was hit.
After the blocks have been cleared and the creature is gone, when you hit the bottom paddle, the blocks will be restored with an additional “ghost-image” row (two block rows) until the rows are almost near the top of the lane where the ball launches from.

Hitting the bottom paddle will also put one more ghost in the center area up to a total of four. If the bottom paddle is hit with four ghosts on screen, it will revert back to one. Destroying one of the ghosts in this area will open the top of that area so the ball can break away at the top of both sides of blocks.

Letters appear on the sides of the screen and change when the top paddle is hit. If the ball hits a letter, it will light up that letter in “Extra” down below on the appropriate side. Spelling Extra and hitting the outlane on that side will give you an extra ball and remove Extra and the letters from both sides for the rest of the game.

Each time the ball hits a sad face, it will light up and turn into a happy face (or vice versa). Light up all five faces to increase the bonus multiplier

Hitting the bottom paddle will restore any sets of bricks that have been completely cleared out. Occasionally the ball will get stuck in a very long loop. Just sit back and relax and eventually the game will figure out the ball is stuck and shoot it out in some other direction.