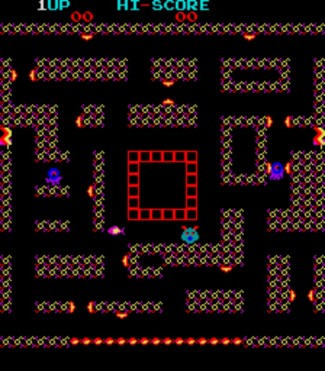 You control a doggie that must set fish as bait for the squids.
Try to lure more than one octopus at once into a gate to increase your score.

Don’t delay too long on any screen as the next screen will start with faster enemies.

Wait on the other side of a gate where you know a pursuing octopus will get trapped and pick it off as soon as it gets stuck. If another octopus was close behind the dead one, move back over the gate and kill it when it gets stuck.

Since the octopuses always pursue you, you can use this to get them to follow the path you want.

Don’t collect extra fish at the start of a screen since no more than 15 can be stored, and any extras are lost.

Use the side tunnels to move across the screen, and the enemies don’t often pursue you through them.

When being pursued by a fast and small octopus drop two fish in front of it, taking it to its largest size and slowing it down.