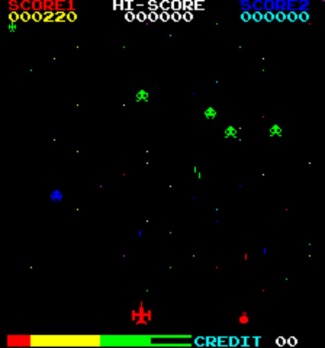 A vertical space battle game where the player controls a ship at the bottom of the screen and fires at various enemy ships, alien creatures and even the mother ship.

After the mother ship is hit four times a refueling ship comes across the screen that you must thrust up and dock with. You have to avoid all the “stars” while doing so and hit precisely at the docking point. You only get one chance at the passing refueling ship. The game then goes back to the first screen with a faster pace and repeats. There are five different screens total.