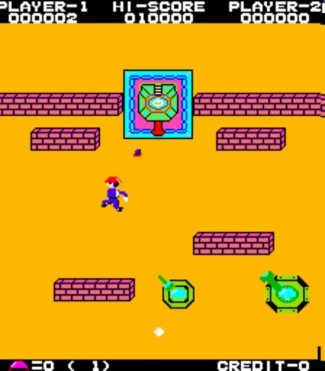 A vertical shoot-em-up using guns and grenades. Jump into light or heavily armored tanks to fight off the enemy tanks. Toss grenades into the fort to win the battle.

The journey begins slowly with the player armed with a gun (special Gun Control) and hand grenades. Quickly he becomes a target for enemy soldiers who also have guns and grenades. Moving faster, he races past trees that hide the enemy who now unleash an ambush barrage of bullets and bombs. Even the ground he races over has been booby-trapped with land mines.

If the player successfully makes it through this deadly obstacle course, he meets an even greater challenge… the enemy is attacking with tanks! His gun now useless, the player can stand and fight with grenades or leap into his own tank (special Tank button) and counter attack.

The battle rages on all fronts as the player fights for his life, racing for cover behind brick walls while outrunning grenades thrown by soldiers in fox holes. It’s all-out war when the player jumps from his tank into a larger one with greater firepower.

Now comes the final test of victory as the enemy’s fort looms in sight. The player must leap from the tank and run through a hail of bullets to throw one final grenade. The white flag heralds total victory!