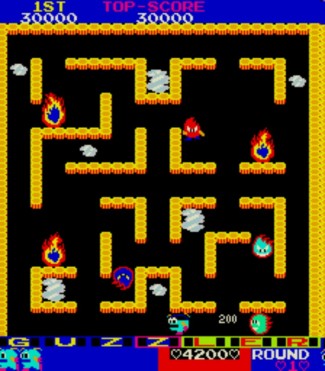 A maze-style game where the player shoots “liquid” to kill monsters. Eat “food” to replace the liquid. Monsters are generated from four fires which must be destroyed to complete level.

A Pacman-like game. Put out four fires by shooting liquid. Three shots and you are empty. Food or time replenishes shots. Your character is coloured in from the bottom up to show the amount of liquid that is available and it’s just an outline when empty. Mazes are varied from complex to almost an empty room. After last life has been lost, you have the chance to get one more by stopping and spinning a circle with your character in the right place.

Walk about a single-screen maze killing flame monsters by shooting them with liquid. Each shot reduces in range and after three shots you are empty. You move faster when empty and after some time, one shot will be replaced. There is also food comes in two sizes that replaces all or some of the shots. You are all yellow when full or an outline when empty. Monsters are generated from four fires which must be destroyed by shooting them with liquid. The final fire sometimes gains eyes and starts moving round the maze chasing you. A bonus cocktail glass appears in the middle of the maze which freezes all the current monsters. Between some of the levels a little sequence is played showing the monsters chasing you.