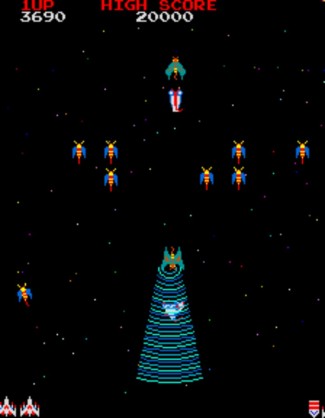 The general gameplay formula is the same as it was for both “Galaxian” and “Galaga”, with the player controlling a spaceship that moves along the bottom of the screen and fires up at the enemy formations at the top of the screen. Movement is not confined to left and right, however, as players can also move anywhere in the bottom half of the screen.

The insectoid enemies fire down upon the player’s ship, and both individual and groups of enemies will break away from the armada to make attack runs on the player. Most of the Galagans can be killed with a single shot, and shooting specific enemies will earn the player a tractor beam. This gives them the ability to capture one or more enemy ships; these prisoner ships will then sit alongside the player’s ship and add to its firepower.

Every few levels, players will enter a ‘Challenging Stage’, where formations of enemy ships will fly in and out of the screen. Players must shoot them as many times as possible to try and spell out a word.