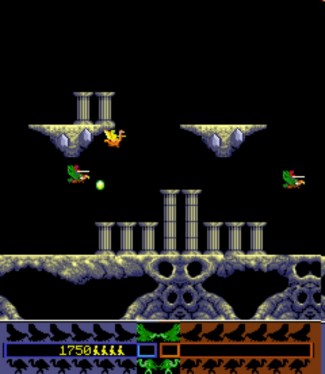 On the planet of the floating cliffs, society calls upon its wing-mounted Gladiators to solve conflicts. You, the Gladiator, must enter the fray, participating in a challenge of honor, a Joust… where only the fittest survive!

The legend of “Joust” continues in Joust 2. Players must solve the puzzle of what strategy will be most effective in dealing with the buzzards and other winged enemies on each of Joust 2’s 35 different backgrounds.

The object of Joust 2 is to defeat all winged enemies by colliding with them. To survive a collision (joust), the Gladiator’s lance must be higher.

Defeating a Buzzard Enemy in a Joust causes release of an Egg. Eggs may be caught in the air or collected on landing areas for bonus points. Be Careful! Eggs falling into the Lava form into aggressive mutants, while uncollected Eggs hatch into dangerous warriors.

Danger lurks everywhere! Giant Statues come to life; Bats fall out of crystals embedded in the rocks; Lava Trolls and Water Monsters eat unsuspecting bird-mounts; Lightning fills the air; and Unbeatable? Pterodactyls patrol the skies. A gigantic Knight presides on several waves. You, the Gladiator, must destroy him! Hitting all four of his red pins explodes the Knight and all his servants.

Gold Egg Feature : A Gold Egg may randomly appear on any wave. Collecting the Gold Egg before it hatches opens a window of awards in the background. To collect an award, step on the red button above the window before a timer expires. Both players reap the benefits of the posted award, which may include bonuses of 1000 to 10000 points, ‘super zapping’ all enemies on the screen, or even receiving an extra life.

Buy-In : Joust 2 is designed for action entertainment for one or two simultaneous players. Players who have started the game may continue where they left off by using the buy-in feature. When a player has used all of his lives, he will hear : “Wish to continue?” A 10-second timer appears in the players score area to allow the game to continue by using a Credit, or inserting a coin, before the player presses the Start button.

Level Selection : At the beginning of a game, the player selects, via the Flap button, one of six different waves, corresponding to the player’s skill level. Then, pressing the Start button begins the game. If the player wins the starting wave, he receives an award of points, approximating the scoring from preceding waves.