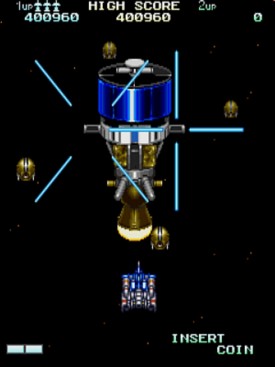 Choose one of three different planes to save New York. A vertical shooter with weapon power-ups.

A great shooter in all respects because of the driving rock soundtrack, multiple scroll speeds and good use of parallax scrolling. There is also a genuine feeling of being challenged but never overwhelmed.

The game scrolls at various speeds forwards and even backwards while fighting the end-of-level bosses. Shooting certain enemies releases power-ups and bonuses. There are different main weapon systems such as rapid-firing guns, lasers, bombs etc. that give the game a limited strategy. Certain levels and sections are easier complete with particular weapons.