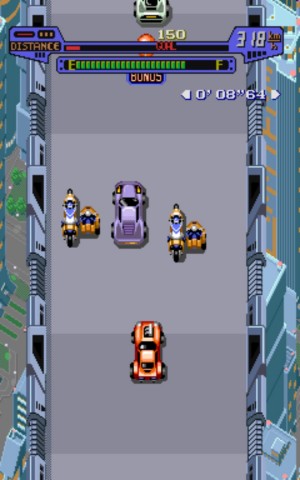 A car shaped player moves along a track between checkpoints meanwhile bumping other cars to the side or jumping on or over them. It is necessary to collect fuel cans and to jump across gaps in the road to keep on driving.

The game offers you the option of 2 cars and a semi truck. You have to play through the game twice in order to finish it. To really rack up your score, play the first time around as the truck and the second time around as either the muscle car or the dragster. For each stage you clear, your time is recorded. When playing the second time around, the faster cars will net you a bonus for beating your original time.