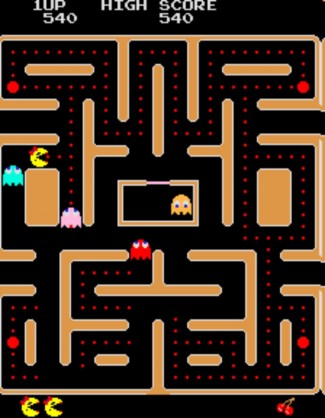 Basically this game is “Pac-Man”, with a few minor differences. The major difference is that the ghosts have fewer restrictions on their movement, making them more formidable. Also adding to the challenge are the different mazes and the fact that the fruit no longer stays in one place, but moves in, out and around the maze. Fortunately there is a power pellet in each corner that (usually) turns the ghosts blue for a period of time, allowing you to eat them for points.

The main difference being the order of levels has been changed. As in the regular “Ms. Pac-Man” game, the maze turns invisible at a certain point. However, in Ms. Pac Attacks, this point is reached much earlier – at about the 144th screen instead of the 255th.