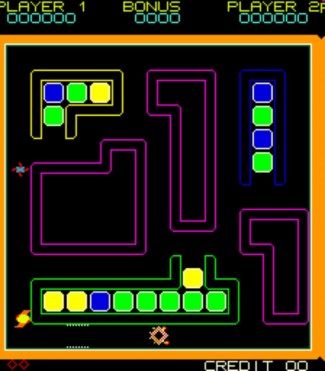 You must move all the colored blocks into the same color corral. Avoid hitting the Disrupter and the Killer.

You need to get all of the like-colored blocks into their matching corrals. Each time a corral is completed 500 points are added to the bonus, and the player is given a net block which may be used to temporarily trap the Disruptor or Killer. When all of the blocks are in the proper locations, the level ends, an the player is awarded the remaining bonus. If the Picker collides with the Disrupter or Killer, you lose a life. The Disruptor moves around randomly picking up and moving blocks, and will often undo your work. The Killer can only kill you, but only appears when there is no bonus remaining. Neither the Picker nor the Disrupter may move though a block, while carrying a block, but the player still dies if he collides with the Disrupter when both are carrying blocks. The Transposer is simply a pest in that it will move you to a different part of the screen if it touches you. For a limited time after the transposer moves you, you are invincible. After levels three and six, there is a little bonus game where the Picker slides tiles to unscramble a picture.

If the game is set to free play and five pickers, the game will not take away a picker when you die.