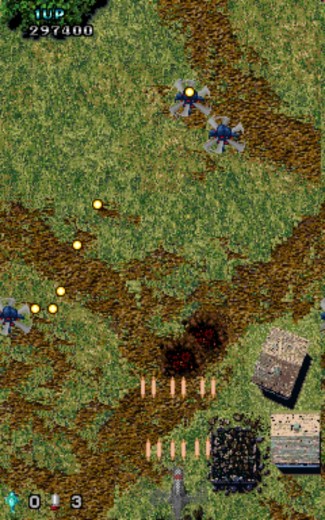 A vertical shoot-em-up that places the player’s helicopter against multiple attacking targets in the air, sea, and land. Collecting the weapon and speed power-ups throughout the game is vital since the gameplay is quite difficult.

The subtitle of the game is “Revenge Joe’s Brother”. However, the story is not integrated into the game, there are no instructions, and the translation of the text is poor at times. After the fortress is destroyed on the ninth level, the player is treated to a very fast scrolling text in broken english that rambles on and on about a beast called terrorism. The rock-n-roll sound track has limited lyrics during the enemy fighter dogfight stages between levels. The difficulty of the dogfight will depend on the player’s previously demonstrated skill.

Early on, the most dangerous enemy is the guided missile truck. Later in the game, the constant waves of small helicopters are much more deadly.

The game can be very difficult and suffers slightly from “once you lose your guy with all the good power-ups you’re dead” syndrome. A single shot will destroy your helicopter.

The object of the game, which is not explained, is to avenge your brother which means that you are Joe!. To do so, you must destroy the fortress on the very last level. When you start the game and it scrolls onto the starting screen, the background contains the different levels that you must survive. The starting position of the various enemies does not vary from game to game.

The purpose of the different power-ups floating baloons is also not explained.

Although it is ultra-rare, a floating icon can appear instead of a baloon which contains a full multi-shot powerup. In two-player mode, there is little differentiation between the players’ helicopters, making it very easy to confuse your helicopter with the other players’. If you do not agree in advance to stay on seperate sides of the screen, you will both meet a quick and repetitive death.

Completely destroying the bunkers before shooting any of the men behind them almost always yields a shotmulitplier powerup. One can regularly have the maximum number of shot multipliers by the end of the first level by using this trick. Powerups seem to appear more frequently if you stay with your guns and do not pick up a missile powerup. Fire as often as you can when you are using the guns, and keep firing. Once you have maxed out your shot multiplier, it is good to start picking up missiles. Part of the trick to playing the game is to scroll the screen from side to side and to pick off the enemies that are placed on opposite sides to harrass you.PBy learning the pattern of when and where enemies appear, you can neutralize them before they can do you any harm. This is especially true with hitting the small helicopters as they come on screen, and nuking the screen just before the guided missile truck. It is best to use the screen nuke when your helicopter is positioned at the very EMbottomEM of the screen. Otherwise, it may only be partially effective.