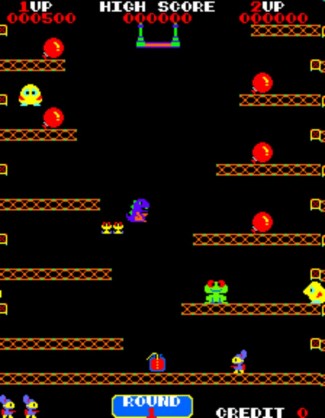 Players control a mouse with a flame-thrower that pops balloons! Scorch the attacking monsters while popping all the balloons on a level. Sip the power drink to transform into the Super Mouse and attack the monsters.

Operate POP FLAMER with lever to crush ballons avoiding or burning up monsters.
Be careful! If hit by electro-shock wave emmited by HARADON, POP FLAMER will be paralyzed for a while.
Flaming distance comes to be shorter gradually. Replenish fuel supply by crushing balloons.
Throw flame to exterminate frogs if blocked by them.
Get POWER DRINK to change to SUPER MOUSE and swallow monsters nearby.
POP FLAMER disappears if touched by monsters.