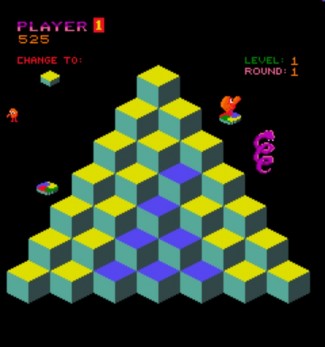 A two-legged, big-nosed, orange creature jumps diagonally around on a pyramid, changing the color of the blocks he lands on. Avoid most moving objects and characters while luring Coily, the snake, to his demise by jumping off the edge of the pyramid onto one of the flying disks. The game has nine levels of four rounds each.

The orange character who you control in this game is Qbert. The purple characters are your enemies and their names are Coily the spring-like snake, Ugg the pig-like creature and Wrong-Way the sharp-toothed creature who moves upside down. The friendly green creatures are named Slick the one with the dark glasses and Sam the one with the white bulging eyes.

You must have Qbert hop on all the squares of each pyramid and change them into the color that they are required to be. Everytime Qbert is hit by something, he says “@[email protected]!”. You must be careful and be sure that Qbert does not fall off the pyramid.

As the attract mode explains, green is safe, nothing else is.

The first dangerous things to appear are the red Whammy Balls. They drop down onto the second row and bounce down in random directions before falling off the bottom.
Next is Coily. He begins as a large purple ball that acts just like a Whammy Ball until it reaches the bottom row. After a brief pause, it becomes the snake and will relentlessly chase QBert around the pyramid.
Ugg and Wrong Way appear together. They are oddballs in that their gravity is different. They bounce around the sides of the blocks Wrong Way on the left, Ugg on the right, going “down” until disappearing off their respective “bottom rows”.

There are three different green things that appear. Unless the enemies prevent you, you will want to make it a point to collect anything green.

Slick and Sam appear together and do the same thing. They bounce down like Whammy Balls, but everywhere they land, the color of the cube changes to something other than the target. As such, they become quite a nuisance in later levels. If you can grab them, you will stop their mischief and net 300 points.
The little green ball is among the least common of things to see because they are so useful. Collecting the green ball not only nets you 100 points but starts a brief time freeze where you can hop around without interference.

On each side of the pyramids, there are discs that Qbert can use to escape from the bad guys. Everytime Qbert jumps onto a disc, it will carry him back to the top of the pyramid. It is best to use a disc whenever Coily is close behind, so when Qbert uses a disc at that moment, Coily will jump off of the pyramid. Killing Coily also clears the board of enemies very handy.