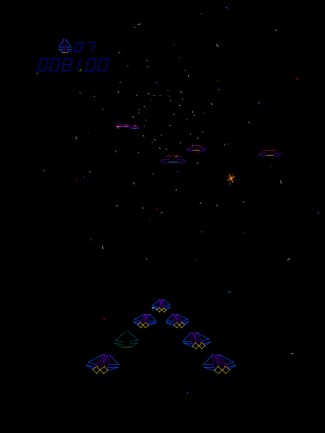 TAC/SCAN is a 1 or 2-player alternate action game, displayed via SEGA’s Color X-Y video system. Commanding unprecedented firepower, the player maneuvers seven fighter ships in a squadron formation. All seven ships fire at once when the FIRE button is pressed, producing a spectacular missile salvo.

The object of the game is to accumulate points by destroying incoming enemy ships while dodging fireballs launched by these enemies. TAC/SCAN presents the space battle from two entirely different perspective views in the course of the game, with visually exciting transition sequences interconnecting the two views.

The player begins the game with a seven ship formation, and a supply of reserve ships which are shown above the player score on the screen. The number of reserve ships at the beginning of the game is switch selectable. An ADD SHIP button placed next to the FIRE button transfers one of the reserve ships in the squadron formation. Where the reserve ships are placed is shown by a half-intensity fighter in the formation. This ‘add ship’ position continuously cycles between the empty squadron positions, and the advanced player will time the ADD SHIP function to place squadron fighters at preferred positions.

A player fighter is blown up by contact with either an enemy ship or an enemy fireball. Whenever all seven ship positions become empty the game is over, EVEN IF THERE ARE REMAINING RESERVE FIGHTERS shown above the player score. Thus the player must continuously judge when to add reserve fighters by using the ADD SHIP button. Add them too early, and they might be depleted too fast; use them too late and you risk ending the game with reserve fighters left over.

There is an additional way to add ships to the squadron. During the course of the action, player fighter ships enter the playfield and intermix with the enemy ships. The player can capture these fighters directly into the seven ship formation by steering them into empty fighter positions. The player’s missile fire DOES NOT blow up friendly fighters–only enemy ships.

TAC/SCAN begins with a top view of the battle. For the first ten seconds the player shoots at enemy ships without having to worry about return fire. After this ‘warm-up’ period, game play escalates dramatically. During this first phase, a different type of enemy appears just after two of the player fighters fly onto the screen. This is the Stinger, which flits around the field and shoots a deadly laser. This ship is a high priority target, since if not dealt with, it will pick off all of the squadron ships and end the game.

At the end of the first phase (the top view) the squadron ships regroup, and a dramatic transition sequence takes the player into phase two. This sequence consists of the fighters rising and enlarging in size, then turning INTO the screen, lighting afterburners, and proceeding to fly forward to continue the battle. The enemy ships now appear far off in the distance, and grow in size as they approach the player’s squadron. The player is given chances to rendezvous with friendly fighters, as in phase one.

At the end of this second phase, a space tunnel appears on the screen, and the player uses the rotary control to steer the squadron formation through the tunnel. Any fighter which hits a side wall of the tunnel explodes on contact. A triangular guide is shown during this sequence to show the player where his triangular ship formation should be. If the player keeps the formation centered within the guide, no ships will be lost.

Once out of the space tunnel, the player resumes with the second round. This is a more difficult top view battle, as at the beginning of the game. TAC/SCAN proceeds with multiple two phase rounds (phase one is the top view, phase two is the rear view) until all squadron ships are lost.

A switch option allows bonus reserve chips to he added with certain score values. The factory set option is to add one reserve ship every 30,000 points.

Regardless of the number of squadron ships on the screen, there are always seven missiles at a time available to the player. If there are seven ships on the screen (a full squadron), pressing the FIRE button launches all seven at once. Another push of the FIRE button cancels the seven in flight and launches seven new ones. If the squadron is not full, the seven missiles can be independently targeted. For example, with a single ship, seven missiles can be fired in seven directions, and only when the eighth is shot is the first one terminated (if it is still on the screen).

The 2-player game is played with players alternating after successful negotiation of the space tunnel. Whenever a player is eliminated, the other player continues and finishes the game.