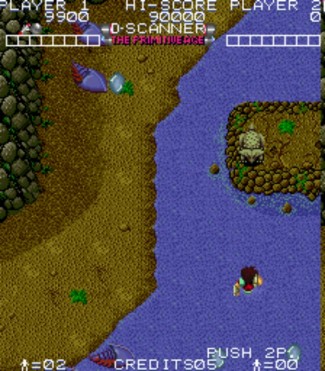 Travel throughout various time periods to save your fellow comrades. Collect power-ups to help you defeat a variety of enemies and end-bosses. Uses rotary joysticks to allow player to fire in a variety of directions.

There are five different time periods that you must travel through in order to find your comrades. Each time era has a different assortment of enemies.

Once the first three comrades have been rescued, you will proceed on to the next two time eras to find the remaining two comrades. These later levels are:

If you get past these levels, you will advance to the final level where you will try to find and defeat the main enemy.

The game offers unlimited continues on all levels except for the final.