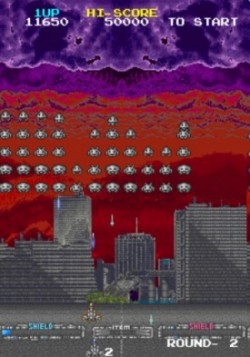 Your ship moves left and right at the bottom of the screen shooting wave after wave of space invaders. The new wrinkles include colourful backdrops and impressive power-ups. The best new addition to the game however is the cattle mutilation section where you must defend cows from flying saucers that swoop down and carry the cows away.

This game, also known as Majestic Twelve, is an update of the classic alien-zapping arcade game. More than a decade newer than Space Invaders, this version features colourful backdrops, fantastic power-ups such as the Fire Flower and the Buster Laser, weird new sound effects and faster game play. The funniest and most memorable new addition to the game is the cattle mutilation section where you must defend cows from flying saucers that swoop down and carry the cows away. There are however enough references to the original for the game to retain the Space Invaders charm. For example the sound on the first level mimics the continual deep repetitive thud sound from the original game.

The gameplay adheres much to the original, making it very easy to play. The object in most cases is to simply clear the screen of invaders before they reach bottom. Every so often, however, a boss invader appears that must be hit multiple times to be destroyed.

Invaders can appear in a variety of arrangements including their traditional formation. Occasionally, saucers will fly across the screen just like in the original, but it is even better when it is destroyed now because power-ups will be released they look like capsules from Arkanoid that can give you super weapons you use the B button to fire them, a time freeze, additional shooting power, shield charge, or armor bunkers.

If you clear the screen, you move on to the next round. If an invader reaches bottom, you lose your ship, and the remaining invaders will be reset to their original positions this is different from the past, where the game ended if they landed — this is fortunate, considering the increased difficulty. If your ship is hit, some of the shield charge will be lost. If the shields fail, the ship will be destroyed.