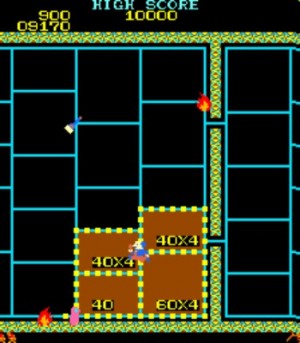 Your character moves on a screen full of boxes, leaving dots wherever he has been. Avoid the baddies pursuing you. Outline each box to move to the next level.

You are a painter trying to paint boxes throughout the entire maze and you are being pursued by an ape, a ghost, and an eraser. You must avoid those pursuers as well as some flames which come burning along the paths of the maze.

You can also punch your pursuers up to three times to temporarily put them out of action.

After you have painted all the boxes in the maze, you proceed on to the next level.