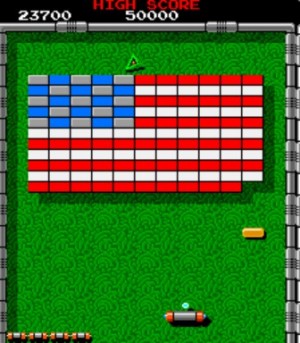 A ball and paddle game where the player’s paddle moves horizontally across the bottom of the screen, bouncing a ball upwards into a changing field of ‘bricks’ in various mosaic patterns. Bricks are of different colours, while some need to be hit several times to be destroyed, while others are indestructible. During gameplay, some of the bricks drop power-ups such as: slow down, catch, enlarge paddle, or ‘disrupt’ which will bounce three balls back towards the playing field. Two other power-ups can be attained: Laser, which allows you to shoot out bricks while still bouncing a ball, and one which will allow you to warp to the next level by means of a small opening to the right of the paddle. Tournament Arkanoid is a cocktail table, with paddles and buttons on two ends, and when the next player is up, the screen flips to accommodate the player on the opposite end of the table.