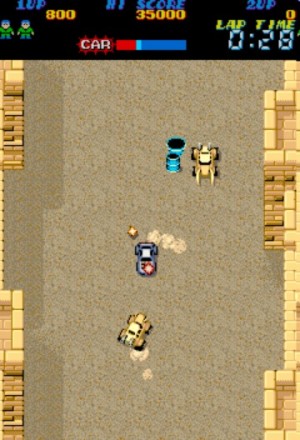 Terrorists have taken Super Joe’s family and a number of townspeople hostage. You must drive your gun-equipped car through dangerous streets to free the hostages and collect power-ups. If your vehicle is severely damaged, you may jump free and continue to fight on foot.

The game begins with animation showing the terrorists getting out of their car, entering a building and then leaving, taking “Super Joe’s” family and townspeople as hostages. Next a threatening letter appears which conveys the terrorist action and Super Joe’s mission.

Throughout each screen there are hostages hidden in the houses. When you release them from captivity you gain points, increased fire power or speed.

You drive and shoot from the car. If the car is hit by a bomb or destroyed by the enemy, you have the ability to escape by hitting the escape button on the control panel. At that time you are now on foot armed with a repeating rifle.

When you are fighting off ambushers on foot, you have the ability to do an acrobatic summersault to evade bullets. As you progress through the six different scenes, an ally will bring you additional cars that you can enter and then proceed with the rest of the game.