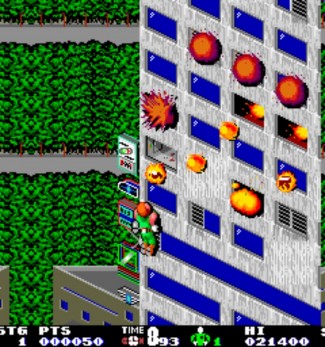 An abstract arcade game in which a single player takes on the role of a firefighter, who must climb a burning building rescuing the people and animals who are trapped inside. As well as the fires, the firefighter must also avoid or deflect (the latter with his extinguisher) a number of falling objects and debris, including cars, couches, hammers, chairs, lamps, stoves and refrigerators.

Fire Trap is very similar, gameplay-wise, to Nichibutsu’s 1980 classic, ”Crazy Climber”. As the firefighter climbs the building, he must use his fire extinguisher to put out the fires which include burning papers, flame-gushing windows and moving fireballs. The fire extinguisher contains only a limited amount of water, so must be used it wisely. Certain extinguished fires, however, reveal cannisters of extinguisher fuel to be collected. Other extinguished fires reveal bonuses and, very occasionally, springboards; which shoot the player higher up the skyscraper.

The firefighter’s ultimate aim is to reach the roof of the skyscraper and rescue a young woman who is trapped there. As the firefighter reaches the roof, a giant fireball appears and circles the tower; this must be either avoided or extinguished. After the firefighter has rescued the woman, he must fly down the building with his jet pack and extinguish any fires remaining on the building; before finally landing safely on the ground. The firefighter will then move on to another burning building to make another rescue attempt.