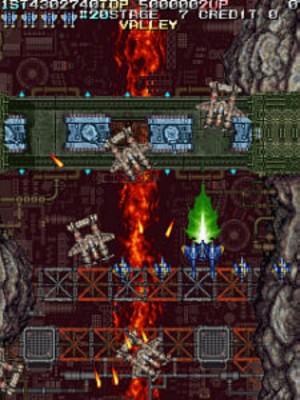 This version adds 5 extra fighters and special course, unlockable by using following codes:
Phase 2: To unlock 3 more fighter planes, insert a coin and press Up, Up, Down, Down, Left, Right, Left, Right, A, B, Start.
Phase 3: To unlock 2 more fighter planes, insert a coin and press Up, Up, Down, Down, Left, Right, Left, Right, B, A, Start before the timer passes 10.
Special Course: Hold C button, insert a coin and press Up, Down, Up, Down Left, Right, Left, Right, B, A, Start and release C button.
There exists 64,000,000 score upper limit in the initial version and has been removed in the unlimited version.
The capitalist nation of Randa has long had a history of excellence in the creation of aircraft, attracting the best of engineers in aerodynamics, artillery, and structuring from the world over. Once, even this interest had waned, until the creation of the air show Bakraid, in which the capabilities of the fighters could be demonstrated outside of simulations for all to see.
Around the time of the seventh Bakraid, a nearby nation, Deneb, had attained an expansionist attitude, forcibly subjugating and annexing several of its neighbors with the assistance of the Shtarterra Security Council. Recently, Deneb has asked to participate in Bakraid. Randa’s defense council, perfectly aware that this is just a pretext for Deneb to get its and the SSC’s engines of war into Randan borders and more easily prosecute their war from there, give their blessing. However, the council secretly contacts the other Bakraid participants, offering even more prize money than normal if they will perform in a special version of Bakraid–genuine war conditions. In other words, use their own top-of-the-line planes to shatter Deneb’s schemes. In all, nine pilots accept this plan, and begin Bakraid two weeks early to catch Deneb unaware…
Training: There are less enemies and bullets, and player’s fighter automatically uses a bomb when being hit. The game ends after 4 stages.
Normal: A course of medium difficulty with 6 stages.
Advance: A course with 8 stages, with increased enemy firing rate and bullet density.
Special/Only Boss: When selected without specifying stage or boss, player plays a course consists of all the boss segments of all stages. When specifying a stage or boss (by pressing left or right), player plays a course consists of the selected stage or boss twice, with second trial featuring increased difficulty. Special can be unlocked either by entering code a special code at the title screen or clearing the Advance game. However, clearing Advance game does not unlock the Special course permanently.
After choosing Normal or Advance course, Stage Edit mode allows player to choose the sequence of stages 2-5 from a set of 4 stages.
In Special/Only Boss mode, an additional Stage I is included, which consists of mid-boss battle in Cloud stage (Stage 6).
There are initially 4 fighters, with extra fighters available by using unlock codes (up to 9 fighters). Pressing different buttons when choosing a fighter can alter a fighter’s ability:
• Main shot power type: Press A button
• Bomber power type: Press B button
• Side shot power type: Press C button
• Speed up type: Press Start button
When using Team Edit, player can choose different fighters for successive lives after the initial fighter is destroyed. If Team Edit is unavailable, it can be unlocked by inserting a coin and press Up, Down, Up, Down Left, Right, Left, Right, A, B, Start before timer passes 10.
Fighter’s rapid fire rate can be increased by holding C then press A when inside a stage, or decreased by holding C then press B when inside a stage.
• Sky Dragon
• Saber Tiger
• Lightning Wolf
• Hammer Shark
• Flame Viper
• Steel Bat
• Solid Ray
• Buster Lizard
• Blade Owl
Some enemies drop medals when destroyed. In addition, medal can also be found in neutral background objects when destroyed. The medal initially worth 100 points, but the value increases when player collects all on-screen medals without missing any before another medal is revealed, up to 10000 points. When a medal is missed, the next revealed medal is worth 100 points. If there are multiple on-screen medals, player can restore medal level after missing a medal by collecting the remaining highest value medal on-screen without missing further medals, before revealing any other medal.
Whenever a player’s fighter destroys a large enemy, a score multiplier is set. The multiplier doubles every time a large enemy is destroyed before timer reaches 0, for up to 64. The multiplier timer increases whenever a large enemy is destroyed. When multiplier is in effect and the player’s medal level is already at 10000 points, revealing medal causes 100000-point medal to appear instead. When multiplier timer reaches 0, the score multiplier effect simply disappears.
Bakraid features a dynamically adjusting rank system that makes the game harder, similar to the rank system in Armed Police Batrider and Battle Garegga. The rank increases when the player collects items, fires its weapons, or uses its bombs. The rank will only decrease when the player grazes bullets or loses lives. In Bakraid, it’s easier to graze bullets and survive than in Batrider since the player sprites are larger in comparison to their hitbox.
Bakraid has a fixed moderate starting rate at the beginning of the game compared to the high starting rank of Batrider and the minimum starting rank of Battle Garegga. Still, it’s no surprise players would suicide or graze bullets to decrease the rank for the game.
As rank increases, more bullets spawn, some bullets move faster, attack patterns are generally trickier to negotiate, and enemies gain health.