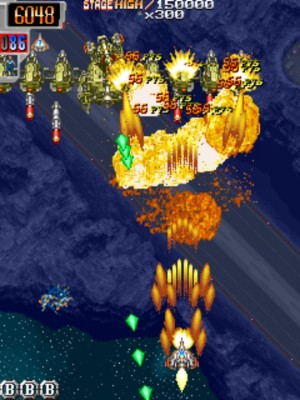 You begin the game by choosing three different settings: fire spread (narrow, medium, wide), special weapon (hunter, roller, bomber), and speed (4 settings). Then, you are immediately thrown into the action.
Holding down Fire as you play will charge your guns to eventually start shooting the special weapon you chose. It’s less powerful than your regular guns but more versatile. If the “Full Auto” is enabled, you can use this button to rely strictly on your more-powerful regular guns.

Scoring in this game is very unique. Enemies you blast will mostly be worth a certain fixed value (hence called the scoring number). You improve this number by rescuing the prisoners enemies release when destroyed (they spin around in blue spheres when released). The faster you destroy an enemy, the more prisoners will be released. Each one you collect (without a miss) increases the scoring number by one, and the game will highlight every tenth prisoner you have rescued in a row. Be careful, as they will bounce off the bottom of the screen and begin an ascent toward the top where they will disappear (to warn you, a prisoner going back up will flash red). Letting a prisoner disappear off the top will reset the scoring number back to one. For maximum score, you must rescue as many prisoners as possible and take care to rescue each one that you release.

In the meantime, enemies and their fire will fill the screen, forcing you to literally dance around to avoid getting destroyed. At the end of each stage is a huge boss with multiple configurations and parts. You can improve your score by destroying each boss’ auxiliary components, which will release prisoners, but this may also cause the boss to become more aggressive. A boss near destruction (the game will warn you, “Watch out!”) will usually resort to scattering the screen with fire, so maneuver carefully or use a bomb. Once the boss is destroyed, your stage score is recorded, compared against previous stages, and added to your total. Then, you move on to the next stage. The game ends when you lose all lives or when you clear all five stages