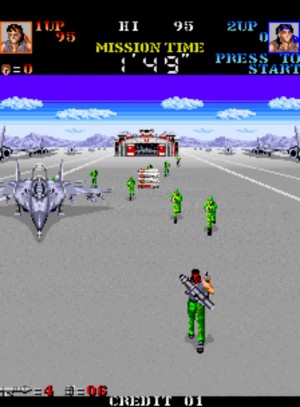 Viewed from behind you are a soldier who must walk forward shooting your way past troops, tanks etc. as the scenery scrolls past like a driving game, until you reach the end-of-level boss. Take him/it out and move on to next stage.

This game was a little unusual in that rather than moving about in a static level, or one that gradually scrolls sideways, you must walk forwards, into the screen. The scenery is scaled and scrolls past you like in a driving game. You can move around in a set area, but you cannot move back outside it, and moving forward beyond a certain point starts the scrolling. You can pick up guided missiles to add to your grenades, and these lock on to a target indicated by a flashing red cross-hair. You can only fire a short way in from of you and this together with rather sluggish controls and movement made the game difficult to get in to. At the start of the game the players are parachuted out of a plane over a scrolling cloud base. Rather neat looking and sounding. Something about the way the graphics were scaled made it look rather blocky and emphasized the black pixels making it hard to discern some object and the jerky scrolling and sudden jumps in scale made this game less appealing than others of the same genre.