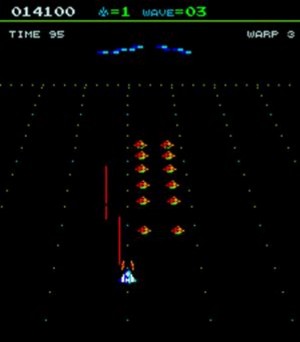 Waves of aliens are trying to destroy your fighter craft. Waves increase in difficulty, with every third or fourth wave being a formation wave where the aliens appear and attack in a particular pattern. Aliens mutate into more dangerous forms the longer they survive, so they should be killed as quickly as possible. The radar at the top of the screen shows what kinds of aliens are approaching and where they will appear.

The aliens usually release white bombs these cannot be shot down, only avoided. They also release homing bombs, which are more dangerous but can be destroyed. Shooting the asteroid and capturing the “mystery” inside will stop the aliens from firing altogether for about 10 seconds, and give you bonus points for each alien you kill.

You have 99 seconds to complete each wave. The quicker you complete the wave, the higher your bonus. An extra ship is awarded every 100,000 points.

Using the warp button lets you escape from sticky situations. You have three warps for each wave, but warps do not accumulate from wave to wave.