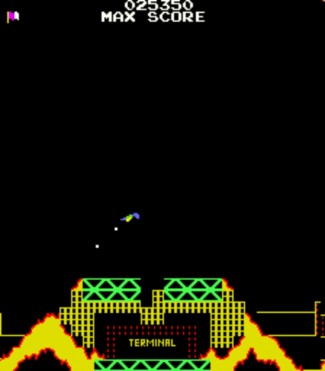 Fly around in your plane shooting hot-air balloons, rockets, and other oddball items in an attempt to reach “The End”. The game starts with you flying over a city, then after shooting the rockets to open the gate, into a series of pipes and finally into “The End” itself.

The player controls a plane that can shoot hot-air balloons, structures, rockets, and some other oddball items. The object of the game is to get to “The End” which you can see off to the left of the screen from where you start if you fly over there. Destroy all of the rockets to open the gate that will take you into a series of pipes. As the levels progress, more oddball things appear to make your flight harder, such as giant drops from a spigot. After making your way through the pipes, the final room contains balls bouncing around which you must shoot or avoid. Fly into “The End” to complete the level. Each level becomes progressively harder. Avoid crashing into any foreground structure which are sometimes hard to differentiate from the background structures in the city, pipes, or walls, the top or bottom of the screen when in the pipes or “The End”‘s room. When outside over the city, hitting the top will bounce you back down facing the opposite direction.

The simplicity of the controls is what gives the game its biggest challenge since you only use up and down on the controller to dive or climb respectively and effectively loop. When flying over the city, hot-air balloons will bounce off the top and bottom of the screen in a very predictable manner. Shoot them to get them off the screen and out of the way. If too many appear, a red balloon will appear making every other balloon increase in speed quite a bit. Destroy rockets located in different parts of the city to open the gate to the pipes. Once in the pipes, navigate through to the other side. The longer you fly through here, the more points you will rack up. As the levels get harder, more obstacles, such as large drops, appear. After navigating the pipes, you will get into “The End” room which has five bouncing balls. Shoot if possible or avoid the balls and fly into the end. Be quick as the balls will return after a short amount of time.

Do not let too many hot-air balloons appear. Otherwise, the dreaded Red one will show up, making all of the other balloons move very quickly. Holding the speed button when diving or climbing will give you tighter turns. The longer you fly around in the pipes, the higher your score will get.

When you destroy the rockets, open the gate, finish flying through the plumbing and you will end up in the “blob” room. Here a green blob repeatedly drops from a pipe in the ceiling. If you adjust your airplane’s attitude just so, you will be able to hold down the joystick, the Fast button and the Fire button, allowing your gun to destroy the blob each time you complete a loop 500 points each. This trick can be performed indefinitely — or at least as long as you are able!