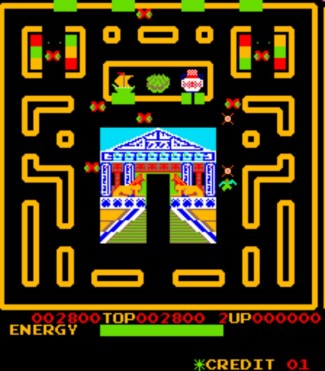 Playing as Sinbad, you try to get treasure and defeat enemies.

On the first level, when you defeat an enemy a single block is removed from your path to the key. Once your path is clear you must get the key then enter one of six unlocked paths (the door keeps opening and closing). You must do this without getting hit by an enemy and before your time (energy) runs out. Once you enter a door you are transported to an open room where spider-like enemies are arranged in a shape at the top. Destroy them all. As you are fighting them, one at a time one will move and go bouncing around the screen. You must destroy all of them before your time is gone. Then the next screen you do the same as the first only now your after a crown and it is harder. The path to the crown is longer than that to the key and some walls will energize on then off. After this you are back to the key.

There are six doors total. After the sixth, the game begins again with increased difficulty.