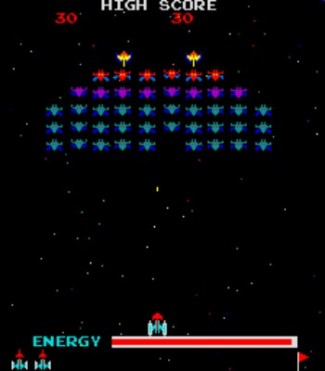 A game where a spaceship flies back and forth shooting aliens and monsters in space.

You are a space fighter pilot who must shoot wave after wave of aliens that look like dragonflies. In this version, after you fire if you move to the side, your shot moves with you. Also, there is an energy indicater bar (timer, if you like) at the bottom sof the screen.

You must shoot the aliens and their boss. Here are some tips for shooting the aliens: kill the boss and his two escorts, then shoot them when they are doing a somersault.