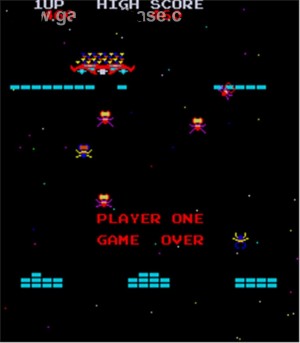 The player controls a bug at the bottom of the screen, shooting smaller bugs that peel off the carapace of a huge mother beetle. Prevent small bugs from taking away blocks from under you, and spelling “The End” in blocks.

There are two ways to lose. The primary and most familiar is to exhaust ships, but the player guards ranks of blocks which are stolen and placed to spell the words “The End”. The game is over when this happens.