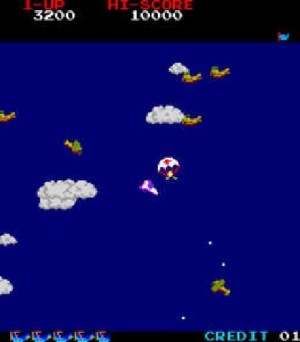 Your aircraft is a sleek jet that travels to five different time eras which each have different enemies. The time periods are as follows:
1. 1910 biplanes and a blimp
2. 1940 WWII monoplanes and a B-25
3. 1970 helicopters
4. 1982 or 1983 the year varies between ROM versions jet planes and a B-52
5. 2001 UFOs.
In the first four eras, the background setting is the sky with clouds but in the fifth era the background is space with asteroids.

During waves with missiles such as the Helicopters and Jets tight turns with many double-back actions will render the attacking missiles mostly useless. Concentrate on shooting down entire squadrons whose appearance is signaled by a siren sound to rack out bonus points. You can also rescue the flying parachutists as you battle the enemies.
You must destroy 56 normal ships in order for the mothership to appear, then you must destroy the mothership by shooting it with seven direct hits. After you have destroyed the mothership, all the other ships will be destroyed and then your jet will advance to the next time period. After you get past all five time periods, the game will begin again with increased difficulty.